Corpus Christi, TX, December 20, 2021 – Uranium Energy Corp. (NYSE American: UEC, the “Company” or “UEC”) is pleased to announce the Company has completed the transactions contemplated in the definitive share purchase agreement with Uranium One Investments Inc., a subsidiary of Uranium One Inc. (“Uranium One”), and has acquired all of the issued and outstanding shares of Uranium One Americas, Inc. (“U1A”) for a total purchase price of $112 million in cash together with an additional $2.9 million in estimated working capital (primarily pre-paid insurance and land payments) and the assumption of $19 million in reclamation bonding (the “Acquisition”).  Uranium One is the world’s fourth largest uranium producer and part of Russia’s State Atomic Energy Corporation, Rosatom.

The Acquisition was fully funded with UEC’s existing cash on hand.  Subsequent to closing, UEC holds approximately $120 million of cash and liquid assets.

Amir Adnani, President and CEO, stated: “We are very pleased to have closed this highly accretive transaction for UEC.  The Acquisition doubles our production capacity in three key categories: total number of permitted U.S. ISR projects, resources, and processing infrastructure.  Also, the opportunity to have acquired an advanced asset base of this quality from one of the global leaders in the nuclear energy industry is highly unique.”

Mr. Adnani concluded: “With this Acquisition, UEC’s sector leading U.S. ISR production profile increases to 6.5 million pounds U3O8 per year based on permitted and installed capacity of our Wyoming and South Texas hub-and-spoke operations. Combined with our physical uranium holdings of 4.1 million pounds of U.S. warehoused uranium, we now have the unparalleled ability to provide reliable domestic supply to the U.S. Government as well as nuclear utilities while providing our shareholders exposure to the fastest growing, 100% unhedged and pure play uranium business listed on the NYSE American.”

UEC Chairman and former U.S. Energy Secretary, Spencer Abraham, commented: “We believe this Acquisition will accelerate the development of domestic uranium production that can supply U.S. origin uranium for a full range of America’s uranium requirements.  We are proud to be the Company to acquire these significant U1A uranium assets that increase U.S. uranium production capabilities and, by returning them to US ownership, strengthen America’s energy and national security.”

The U1A assets are primarily situated in the Powder River Basin of Wyoming; the most productive in-situ recovery (“ISR”) uranium mining district in the western hemisphere. Highlights of the Acquisition include the following:

(*)        The U1A historical resources are not treated by UEC as current, but the Company plans to complete and submit technical reports as soon as possible for the purposes of establishing current resources (1)

UEC has outlined several initiatives to integrate the U1A assets into the UEC portfolio.  They include:

The U1A portfolio of projects (the “Portfolio”) being acquired pursuant to the Acquisition includes, among other assets, seven projects in the Powder River Basin, three of which are fully permitted, and five in the Great Divide Basin.  The portfolio consists of dozens of under-explored, mineralized brownfield projects, backed by detailed databases of historic uranium exploration and development programs, thus greatly enhancing the potential for resource expansion. 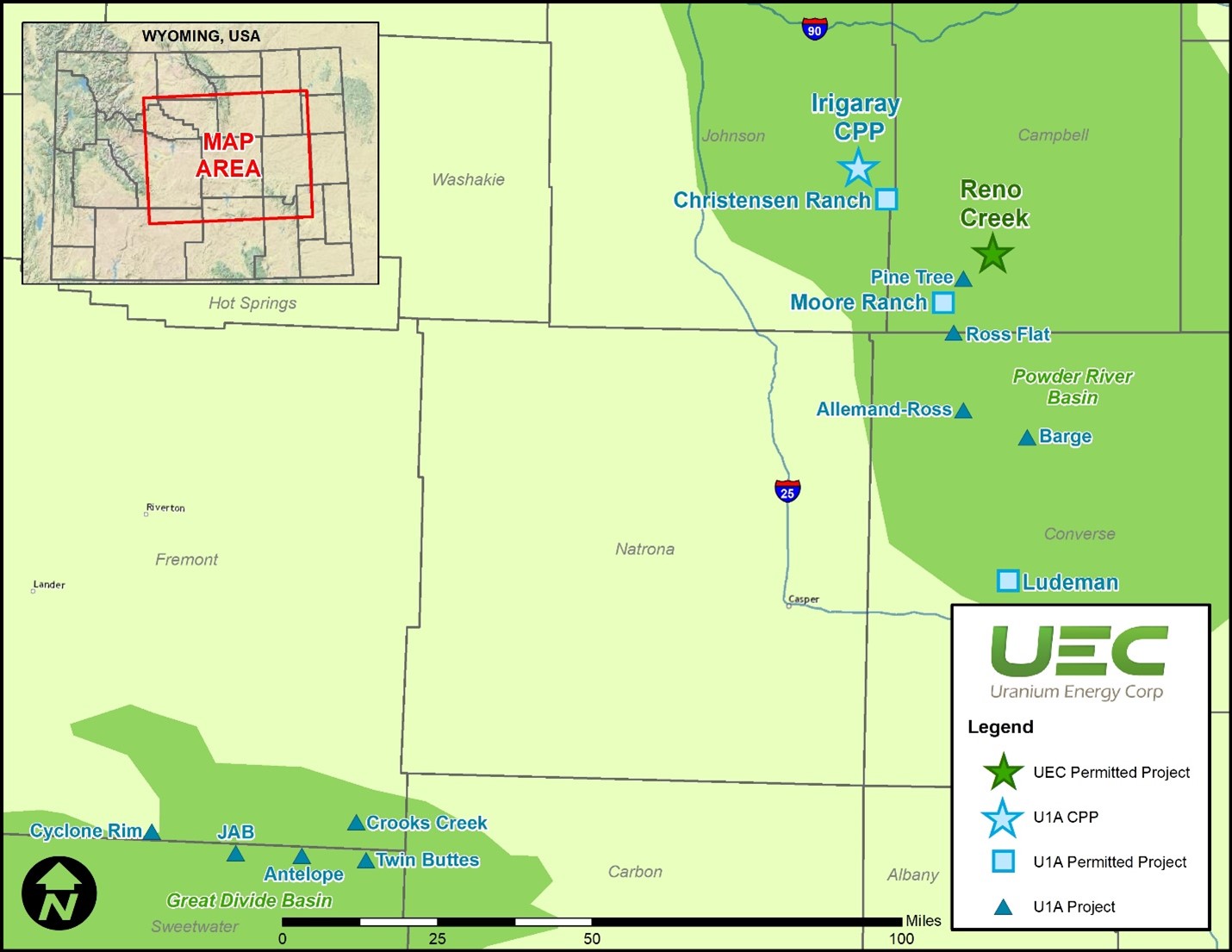 (a)        Mineral Resources were classified in accordance with CIM Definition Standards. Cut-off grade is 0.02% eU3O8 over a minimum thickness of 2 ft. Mineral Resources have not been demonstrated to be economically viable. Production by U1A has been deducted.  – “Uranium One Q1 2019 Quarterly Report “Mineral Resource and Mineral Reserve Estimates”.

(b)        Mineral Resources were classified in accordance with CIM Definition Standards. Cut-off grade is 0.02% eU3O8 over a minimum thickness of 2 ft. and a GT cut-off of 0.30 ft-%. Mineral Resources have not been demonstrated to be economically viable. Independent Technical Report – “Technical Report on Resources, Moore Ranch Uranium Project, Campbell County, Wyoming USA”, WWC Engineering, April 30, 2019.

The technical information in this news release has been prepared in accordance with the Canadian regulatory requirements set out in NI 43-101 and was reviewed by Dayton Lewis, P.G., Manager of Resource Development Wyoming for the Company, a Qualified Person under NI 43-101.

Uranium Energy Corp is a U.S.-based uranium mining and exploration company. As a leading pure-play American uranium company, UEC is advancing the next generation of low-cost and environmentally friendly In-Situ Recovery (ISR) mining uranium projects.  In South Texas, the Company’s hub-and-spoke operations are anchored by our fully-licensed Hobson Processing Facility which is central to our Palangana, Burke Hollow, Goliad and other ISR pipeline projects. In Wyoming, UEC controls the Reno Creek project, which is the largest permitted, pre-construction ISR uranium project in the U.S. Additionally, the Company’s diversified holdings provide exposure to a unique portfolio of uranium related assets, including: 1) major equity stake in the only royalty company in the sector, Uranium Royalty Corp; 2) physical uranium warehoused in the U.S.; and 3) a pipeline of resource-stage uranium projects in Arizona, Colorado, New Mexico and Paraguay. In Paraguay, the Company owns one of the largest and highest-grade ferro-titanium deposits in the world. The Company’s operations are managed by professionals with a recognized profile for excellence in their industry, a profile based on many decades of hands-on experience in the key facets of uranium exploration, development and mining.

(2)  The losses reported by U1A as at December 31, 2019 were US$148.5M, but the deductibility of such losses is limited due to the current and historical changes of control of U1A, and UEC will be evaluating the extent to which these losses will be available to offset income in future years post-closing.