About the Wyoming Asset Hub and Spoke In-Situ Recovery Project

The Project consists of 12 Project areas as shown below.

Moore Ranch:  The Moore Ranch Project is fully permitted and was previously developed by Conoco in the early 1980s.  The Project is located in the PRB in Campbell County.

Reno Creek:  The Reno Creek Project is fully permitted and was primarily developed by Rocky Mountain Energy in the 1980s. The project is located in the PRB in Campbell County.  See the Company’s release dated February 9, 2022.

Ludeman:  The Ludeman Project is fully permitted, is located in the South Powder River Basin (“SPRB”) in Converse County, and is comprised of the former Leuenberger, North Platte and Peterson projects developed in the late 1970’s by various other operators.  Two ISR pilot plant operations were previously carried out at the Leuenberger and North Platte properties. Most of the Project area was held by Power Resources (Cameco) until 2003, after which Energy Metals (precursor to U1A) acquired the properties.

Allemand – Ross:  The Allemand-Ross Project is located in Converse County within the SPRB.  The Project was originally drilled and developed by Conoco beginning in the late 1960s. The mineralized trends are northerly extensions of those at Cameco’s Smith Ranch/Highland Uranium Project.

Barge:  The Barge Project is located in Converse County in the SPRB.  It is near the site of the former Bear Creek Uranium Mine operated by Rocky Mountain Energy in the 1970s and 80s. The majority of the mineralization is within deeper trends not developed previously.

Jab/West Jab:  The Jab Project is located in the Greater Green River Basin (“GGRB”) in Sweetwater County.  The Project area was extensively explored during the 1970s through the mid-1980s with the principal exploratory work and drilling completed by Union Carbide Corporation and Western Nuclear Corporation.  In 2006 and 2007, U1A conducted exploratory and verification drilling on portions of the Project.

Clarkson Hill:  Clarkson Hill is located on the southern edge of the Wind River Basin, 26 miles from Casper in Natrona County.  Roll-front type uranium mineralization was discovered at Clarkson Hill during the 1950s, but the property was more extensively explored from the 1970s through the mid-80s. Most of this work was completed by Minerals Exploration Company, a subsidiary of Union Oil.

Nine Mile:  The Nine Mile Project is located in the southwestern portion of the PRB just north of Casper.  Uranium mineralization exists in typical Wyoming roll front systems within sandstones of the upper Cretaceous Teapot Sandstone of the Mesa Verde formation.  The property was previously developed by Rocky Mountain Energy in the late 70s through the early 80s and was ISR pilot tested at that time.  Energy Metals initiated delineation drilling in Wyoming on this property in September 2006.

Red Rim:  The Red Rim Project was formerly developed by Union Carbide, Wold Uranium and Union Pacific Minerals.  Mineralization is in the Tertiary Fort Union formation within the GGRB.  Three Fort Union sandstone zones host roll front mineralization and the strike is projected at up to fifteen miles.

The following map shows the location of these projects within the Wyoming Project area. 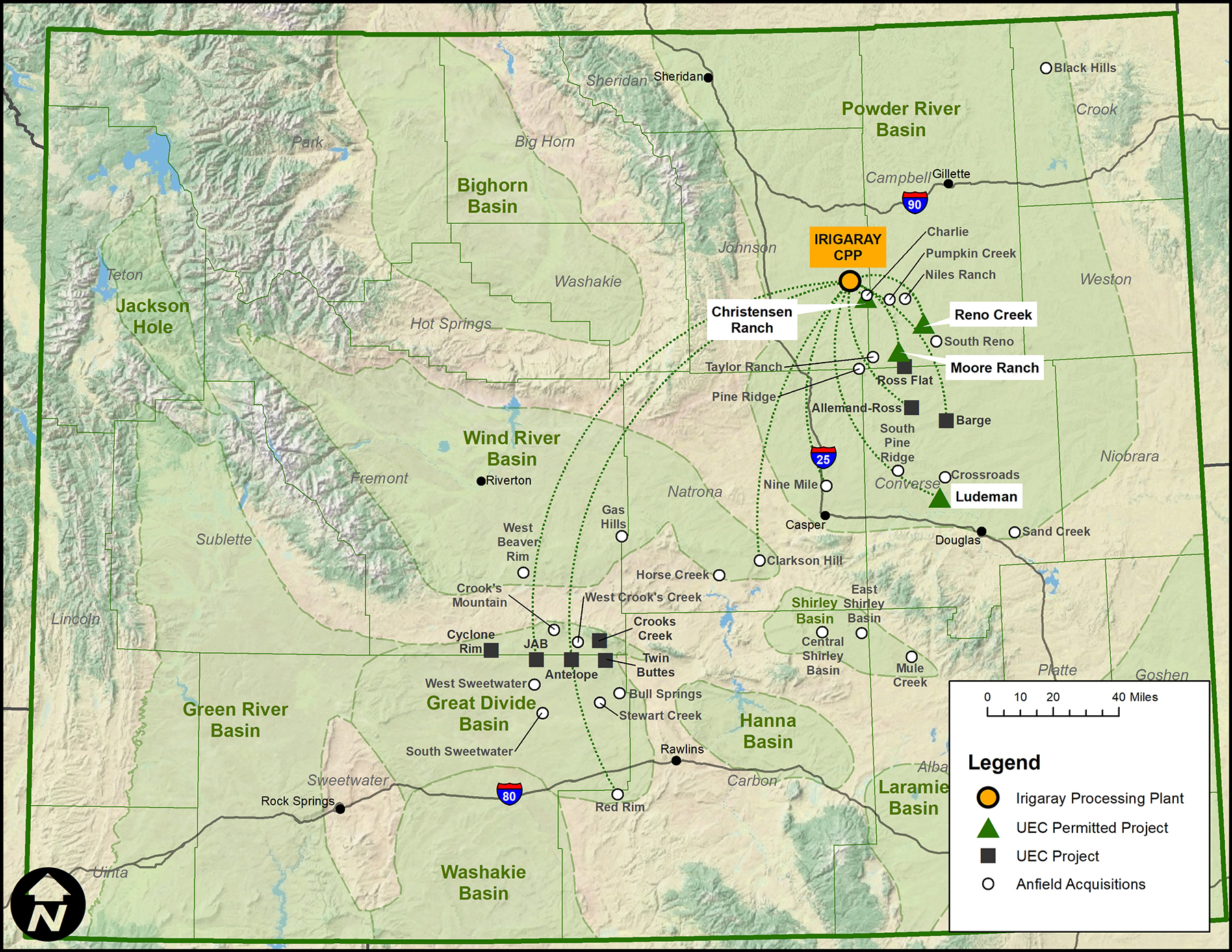 Summary capital and operating cost estimates are not included with the TRS since the Company is reporting the results of an initial assessment.

The technical information in this news release has been reviewed by WWC Engineering, a consultant to the Company, and by Dayton A. Lewis, P.G., Vice President Resource Development – Wyoming, for the Company, being a qualified third party firm and a Qualified Person under Item 1302 of Regulation S-K.