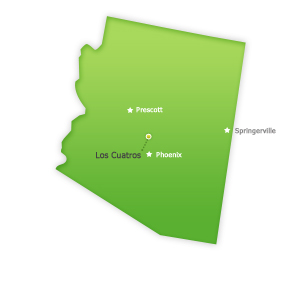 Uranium Energy Corp's Los Cuatros Project (formerly referred to as New River) is located in northern Maricopa County, Arizona, on state lands in an historic mining area.  Teck Corporation, on behalf of Univex Mining, previously conducted exploration and development on the property, resulting in an resource estimate of 30 million tons having an average grade of 0.02% eU3O8, or approximately 12 million pounds of eU3O8.  Teck performed geologic mapping, drilling and gamma surveys on the property in 1979 for Univex Mining.  In addition, limited metallurgical testing was carried out by Lakefield Research of Lakefield, Ohio.  Fourteen holes were drilled in the central portion of the property.  The drill logs and cuttings indicate that uranium is disseminated within tuffaceous lakebed sediments typically at depths varying from 150 to 230 feet with occurrences as shallow as 65 feet below the surface.

The foregoing resource estimate for Los Cuatros was completed prior to the implementation of SK-1300. A qualified person has not completed sufficient work to classify the historic mineral resources as current mineral resources, and the estimate should not be relied upon.  The Los Cuatros Project uranium occurrence is geologically similar to the Company's Anderson project in Yavapai County, Arizona.