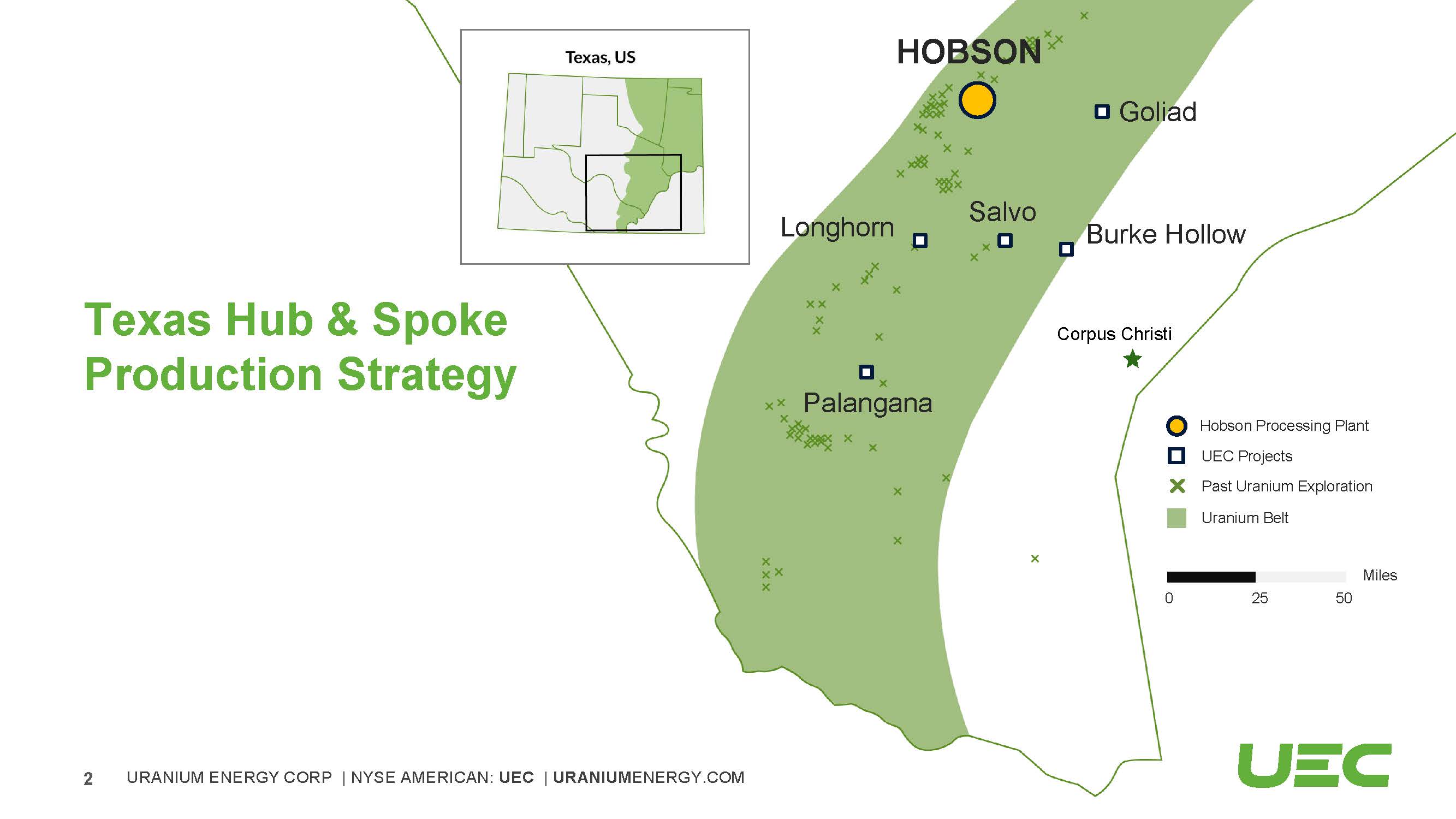 About the Texas Hub & Spoke Project

The Hobson CPP will serve as the ‘hub’ of the Project, with the other Project areas serving as satellite facilities, or the ‘spokes’. The Hobson CPP will process all the mineral mined on each of the other Project areas. The Project is in the South Texas Uranium Province (“STUP”), which is part of the South Texas coastal plain portion of the Gulf of Mexico Basin (“GMB”).

Mineral rights for the Project are all private (fee) mineral leases. Fee mineral leases are obtained through negotiation with individual mineral owners. 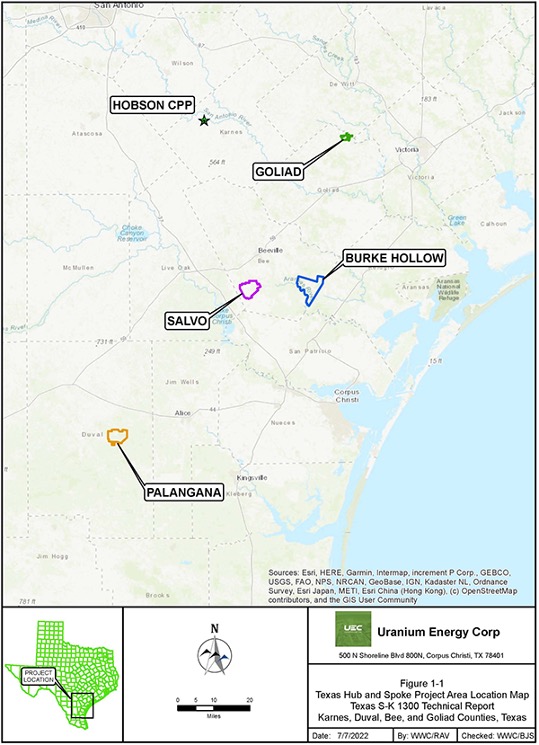 Uranium mineralization at the Project is typical of Texas roll-front sandstone deposits. The formation of roll-front deposits is largely a groundwater process that occurs when uranium-rich, oxygenated groundwater interacts with a reducing environment in the subsurface and precipitates uranium. The most favorable host rocks for roll-fronts are permeable sandstones with large aquifer systems. Interbedded mudstone, claystone and siltstone are often present and aid in the formation process by focusing groundwater flux.

To date, UEC holds data from 5,232 drill holes that have been completed by UEC and previous uranium exploration companies on and nearby the five Project areas held by UEC. Data from the drilling, including survey coordinates, collar elevations, depths and grade of uranium intercepts, have been incorporated into UEC’s database.

Recent developments and operations include all work that has been done to develop and operate the Project properties since the last technical reports were written to update the resources and development at each Project area.

Summary capital and operating cost estimates are not included with this TRS, since UEC is reporting the results of an Initial Assessment (“IA”) without economic analysis. No new construction/development has occurred at the Hobson CPP or at Salvo since the 2010-2012 drilling campaign. However, UEC initiated drilling projects on Palangana, Goliad and Burke Hollow in 2010-2015, 2014 and 2019-2021, respectively. UEC also activated several wellfields at Palangana to produce uranium from 2010 to 2016.

In 2019, UEC completed 129 drill holes, mostly focusing on delineating the Lower B1 and Lower B2 sands in the proposed PA-1. In addition, UEC began installing perimeter monitor wells in PA-1. In total, 57 holes were drilled solely for delineation and exploration purposes and 72 holes were drilled for monitoring purposes.

No historic data was used in this estimate which includes only data from drilling projects conducted by UEC from 2012 to 2022. 297 new holes were drilled and logged in 2021 and 2022 to complete this estimate.

This IA for the Project has been prepared in accordance with the regulations set forth in S-K 1300 with the objective of disclosing the mineral resources at the Project.

Based on the density of drilling, continuity of geology and mineralization, testing and data verification, the mineral resource estimates meet the criteria for indicated or inferred mineral resources as summarized herein.

The technical information in this news release has been reviewed by WWC Engineering, a consultant to the Company, and by Clyde L. Yancey, P.G., Vice President-Exploration for the Company, being a qualified third party firm and a Qualified Person under Item 1302 of Regulation S-K.